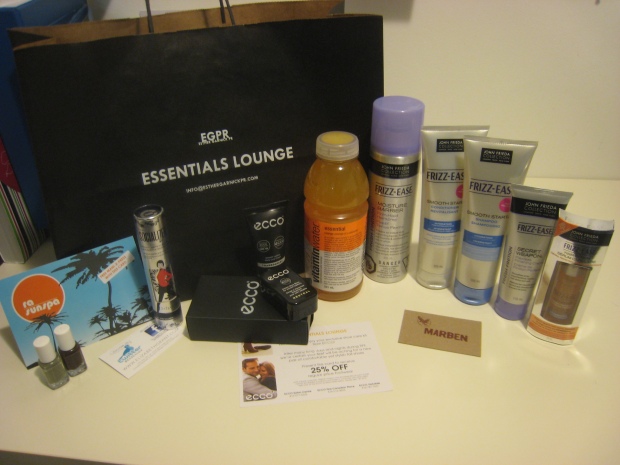 On Tuesday, I had the good fortune to be invited to the Toronto International Film Festival 2010 Essentials Lounge for Media at the Ra Sun Spa (388 Richmond Street West, Toronto) for a little pre-TIFF pampering. Organized by super cool babe Esther Garnick, this lounge was catering to media who tend to work long hours over the ten day festival.

When I arrived, the awesome Lisa from Brill Communications was on hand with her clients from Ecco Shoes who gave my patent leather heels a nice little buff while I watched the super hot ET Canada producer Angie Smith interview a Playmate. (Watch it here.)

Then while sipping on a VitaminWater, I got my nails did in Essie’s “Lollipop”-  a fab bright red.

I wish I had time to take advantage of the other services, which included eyebrow threading, spray tanning for legs, underarm waxing, and hair styling with Alain Larivée from John Frieda.

Just as I was leaving, Esther was explaining to author and Globe & Mail columnist Leah McLaren how she had inspired the lounge from an article that she had written in 2005 and that Esther had held onto ever since. So great to see how an idea can be made into a reality.

Thank you Esther for a wonderful afternoon treat. See you on the red carpet!

Originally from Glasgow, Scotland, Gail McInnes has made an indelible mark on the Canadian fashion and entertainment scenes; managing and guiding the careers of some of the country's most notable talents, including Lucian Matis, Hilary MacMillan, Stephen Amell (CW's Arrow), Natalie Brown (The Strain), Brad Goreski (E! Fashion Police), and more. Visit gailmcinnes.com for more information or email gailmcinnes@gmail.com.

New year! New hair!
2022 was all about getting back out and reconnecting with some of my favourite people. From fundraising galas and fashion shows to BBQs and karaoke nights. More of this in 2023 please!
Boxing Day morning in Ontario
Bonjour mes amies! Happy Christmas Eve Eve! All our presents are wrapped, the turkey is defrosting, I'm doing my annual end-of-year inbox clear out, and counting down the hours until I can crack open the Bailey's and finish bingeing the new season of Emily in Paris.
Last night we celebrated the incredible Susan Langdon, C.M. and her induction into the Order of Canada. It was a fun filled night with lots of bubbles, delicious food, and so many of my favourite fashion friends, many who I haven't seen for a number of years.
Had an amazing time at @disneyimmersion by @lhimmersive this week. From the exhibition at the start showing how the animations come to life to the interactive lights, smoke bubbles, and larger than life projections, this was a super fun way to create some magical memories with my son. Thank you @nataliedeane for bringing us along.
Where would I be without these two incredible women? 💖💖💖
My top ten favourite books of the year. In (kind of) order of most favourite - which is very hard. Though "Five Little Indians" tops my list and I highly recommend everyone read it. It will be the one book I will mention first for as many years as possible.
My 19 Crimes Action Martha has arrived! And she is a mega babe! Thank you @briony and @19crimes for this spectacular gift that will be a fixture in my home for years to come.
Last night, the nicest group of people gathered to celebrate the opening of the new @gregmayhair location at 131 Avenue Road in Toronto.
Posing on the runway at @fashionarttoronto 🤩
F'rowing at @fashionarttoronto. What an absolute blast to see fashion on the runway again. Best street style watching too. Can't wait to see what next season has in store!

Originally from Glasgow, Scotland, Gail McInnes has made an indelible mark on the Canadian fashion and entertainment scenes; managing and guiding the careers of some of the country's most notable talents, including Lucian Matis, Hilary MacMillan, Stephen Amell (CW's Arrow), Natalie Brown (The Strain), Brad Goreski (E! Fashion Police), and more. Visit gailmcinnes.com for more information or email gailmcinnes@gmail.com.